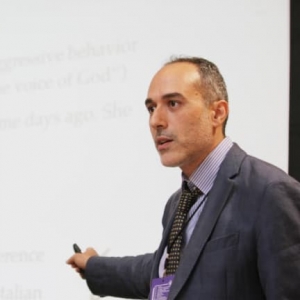 Vittorio De Luca is an Italian psychiatrist born in Rome, who is currently working in the Psychiatric Intensive Care Unit (SPDC) in Monterotondo, a town close to Rome (ASL ROMA 5). He has been working for 9 years in Private Hospital specialized in Addiction and Acute Psychiatric Disorders, then he started working in the Italian National Health Service. His first employment was in the Community Mental Health Service (Centro di Salute Mentale, CSM) in Palestrina, then in the new forensic Unit established in Subiaco (Residenza per l’Esecuzione di Misure di Sicurezza, REMS).

His medical and psychiatric training had been in La Sapienza University, in Rome; during his residency, he spent a term in Montreal, attending the McGill Summer Program in Transcultural Psychiatric and the Cultural Consultation Service led by Laurence Kirmayer and his team in the Jewish General Hospital.

He is a lecturer in Transcultural Psychiatry since 2007 in Istituto di Ricerche Europee in Psicoterapia Psicoanalitica (IREP), a private Institute providing higher education and specialization to psychodynamic psychologists and psychotherapists in Rome.

He has specific interest in the impact of cultural diversity in the organization of National Health System in Italy, Cultural competence in forensic settings and cultural approach to refugee system.