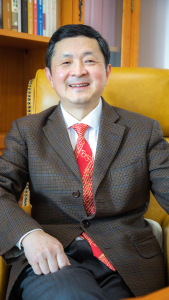 School of Medicine of Tongji University.

Dr. Zhao has made longstanding contributions to the development of cultural psychiatry, psychotherapy and clinical psychosomatic medicine in China. He is one of the active members of WACP since the organization was founded in 2006.

As the first Master-degree student majoring in cultural psychiatry in China, he completed a research project on stress in the Yi Nationality in 1988. He set up the first open psychiatric ward in general hospitals in China in 1988. In 1993, he received his doctorate with a dissertation entitled “Introducing systemic family therapy into China as a cultural project.” After he returned from Germany to China in 1993, he established the first psychotherapy center in China in 1994. He has been involved in professional work to promote the birth and implementation of the first Mental Health Law of P.R. China, including drafting relevant national administrative regulations.

In 2008, he received the International Sigmund Freud Award for Psychotherapy due to its contribution to introducing Western psychotherapy into China with great success. He has received many awards from academic organizations and authorities for achievements in research, clinical care and teaching in mental health.

Currently, he is interested in trying to transform psychiatry in China from a rather biologically oriented practice to a more humane one by integrating humanities and social sciences into psychiatry, by which cultural psychiatry is playing one of the key roles.